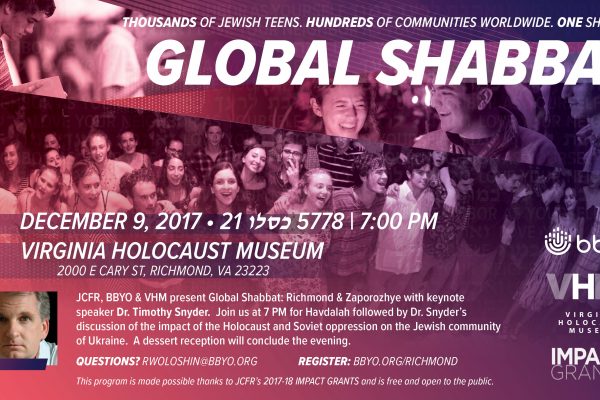 Located in southeastern Ukraine, and home to almost 750,000 people, Zaporozhye lies roughly three hours from the conflict zone in Donbass. Since 2014, Zaporozhye has become the home to many of Ukraine’s 1.4 million internally displaced persons – many of whom are Jewish. JCFR, through the American Jewish Joint Distribution Committee (JDC), has adopted Zaporozhye as a partner community and provides financial support to address the growing humanitarian needs of the Jewish community there, especially the aging Holocaust Survivor community.

On Saturday, December 9th join us at VHM beginning at 7 pm for Havdalah, the concluding service of Shabbat, led by BBYO, the world’s largest pluralistic Jewish youth movement. The evening will include song leading from Rachel Wolman and Dr. Snyder’s discussion of the Holocaust and Soviet oppression on the Jewish community of Ukraine and how that legacy has impacted that community.

A dessert reception will conclude the evening in addition to a book signing by Dr. Snyder.

This event is free and open to the public. However, we ask that you to please RSVP today as space and tickets are limited.
Register today at www.bbyo.org/richmond 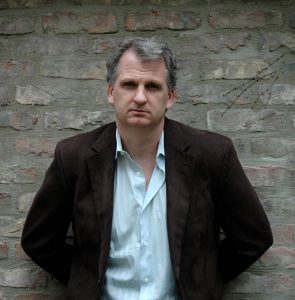 Dr. Timothy Snyder is one of the leading American historians and public intellectuals and enjoys perhaps greater prominence in Europe, the subject of most of his work. He is the Richard C. Levin Professor of History at Yale University and a permanent fellow at the Institute for Human Sciences in Vienna. Snyder received his doctorate from the University of Oxford in 1997, where Snyder was a British Marshall Scholar. Before joining the faculty at Yale in 2001, he held fellowships in Paris, Vienna, and Warsaw, and an Academy Scholarship at Harvard. He speaks five and reads ten European languages. Among his publications are six single-authored award-winning books, all of which have been translated: Nationalism, Marxism, and Modern Central Europe: A Biography of Kazimierz Kelles-Krauz (1998, second edition 2017); The Reconstruction of Nations: Poland, Ukraine, Lithuania, Belarus, 1569-1999 (2003); Sketches from a Secret War: A Polish Artist’s Mission to Liberate Soviet Ukraine (2005); The Red Prince: The Secret Lives of a Habsburg Archduke (2008); Bloodlands: Europe Between Hitler and Stalin (2010); and Black Earth: The Holocaust as History and Warning (2015). Bloodlands won twelve awards including the Emerson Prize in the Humanities, a Literature Award from the American Academy of Arts and Letters, the Leipzig Award for European Understanding, and the Hannah Arendt Prize in Political Thought. It has been translated into thirty-three languages, was named to twelve book-of-the-year lists, and was a bestseller in six countries. Black Earth: The Holocaust as History and Warning (2015) will appear in some thirty foreign editions. It has been a bestseller in four countries and has received multiple distinctions including the award of the Dutch Auschwitz Committee.

Your ticket for the: Global Shabbat: Richmond and Zaporozhye