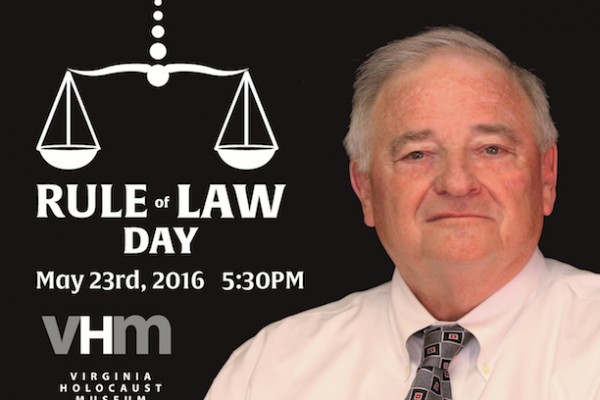 Please join us as we honor Dr. Charles W. Sydnor, Jr., our Executive Director, Emeritus, with the Rule of Law award for his distinguished service to the Virginia Holocaust Museum and his years of service to world Jewry in bringing Nazi War Criminals to justice.
Dr. Charlie W. Sydnor, Jr. is a highly respected historian of the Holocaust and World War II. He provided the United States Department of Justice and its Office of Special Investigations with expert testimony in twenty-one court cases involving former SS concentration camp guards and Nazi death camp collaborators. Most notably, in the case of Ukrainian guard John Demjanjuk, who was found guilty of being an accessory to the murder of 28,060 Jews at the Sobibór extermination camp. Dr. Sydnor has also served as the Virginia Holocaust Museum’s Executive Director from 2013-2015, and is still on staff as their Senior Historian.
One of the central lessons of the Holocaust focuses on the centrality of the Rule of Law in the creation and maintenance of civil societies. To safeguard that belief, the Nuremberg Courtroom Committee of the Virginia Holocaust Museum in tandem with the Virginia Law Foundation established an annual program to honor individuals whose life and work emulate the highest ideals enshrined in the principals that established the Nuremberg Military Tribunal (1945–46) and later the International Court of Justice.
Ceremony to start at 5:30pm at the Virginia Holocaust Museum which is located at 2000 East Cary Street, Richmond, VA 23223

Your ticket for the: Rule of Law Day