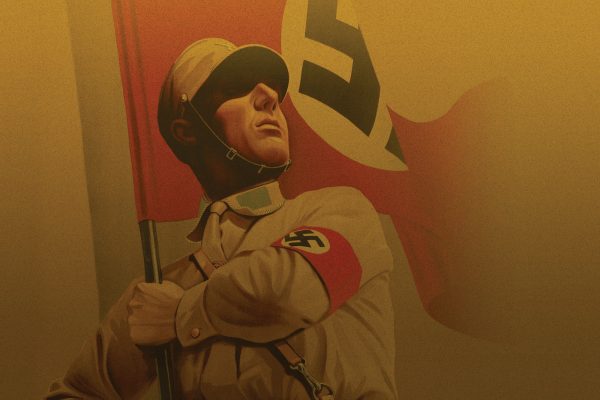 The Nazi Party developed a sophisticated propaganda machine that deftly spread lies about its political opponents, Jews, and the need to justify war. But Nazi propaganda was much more complex than that. For the Nazis to achieve power and pursue their racial policies and expansionist war efforts, a much more nuanced picture had to be painted—one that would appeal to broad swaths of the population, not just a fanatical extreme.

The exhibition reveals how shortly after World War I, the Nazi Party began to transform itself from an obscure, extremist group into the largest political party in democratic Germany. Hitler early on recognized how propaganda, combined with the use of terror, could help his radical party gain mass support and votes. He personally adapted the ancient symbol of the swastika and the emotive colors of red, black, and white to create the movement’s flag. In doing so, Hitler established a potent visual identity that has branded the Nazi Party ever since.

After seizing power, the Nazi Party took over all communications in Germany. It marshaled the state’s resources to consolidate power and relentlessly promote its vision of a “racially pure,” utopian Germany that needed to defend itself from those who would destroy it. Jews were cast as the primary enemies, but others, including Roma, homosexuals, Jehovah’s Witnesses, and mentally and physically disabled persons, were also portrayed as threats to the “national community.”

As Germany pushed the world into war, Nazi propaganda rationalized Germany’s territorial expansion as self-defense. Jews were depicted as agents of disease and corruption. The Nazis’ actions against them, in Germany and occupied countries, were promoted as necessary measures to protect the population at large.

This exhibition was underwritten in part by grants from Katharine M. and Leo S. Ullman and The Blanche and Irving Laurie Foundation, with additional support from the Lester Robbins and Sheila Johnson Robbins Traveling and Special Exhibitions Fund established in 1990 and Dr. and Mrs. Sol Center. This exhibit was produced by the United States Holocaust Memorial Museum.

Register for Tour: State of Deception

Your ticket for the: State of Deception