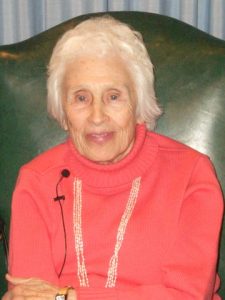 We at the Virginia Holocaust Museum are heartbroken to hear of the passing of Clara Daniels. A Holocaust Survivor from Hungary, she was beautiful in life and was one of our survivors who spoke for us and helped us in many ways.

Clara Daniels (Fried) was born on October 17, 1923, in Nyírkarász, Hungary to Morris and Jolan Fried. Clara had two brothers: an older brother named Laslo and a younger brother named Joseph. The Frieds lived on a large, family-owned farm that was integral to the local community.

In 1944 the family was sent to live in the Kisvárda ghetto. A few months later, they were deported to Auschwitz by railcar. Upon arrival, Clara was separated from her immediate family. She managed, however, to stay together with some of her cousins, Susan, Eva, and Katie. Clara was later sent to Dachau in the fall of 1944, and then to Allach, where she was liberated. After liberation, Clara went to the Feldafing displaced persons camp outside of Munich before she migrated to the States on July 15, 1949.

Clara met her husband, Cary Daniels, in Brooklyn. Cary had immigrated to the States from Poland. He had also been in Auschwitz as well as five other concentration camps. The couple married on May 6, 1951. They had two sons before eventually settling in Richmond.

The funeral will be at 3:00 PM today at Emek Shalom (within Forest Lawn Cemetery) 4000 Pilots Lane, Richmond, VA 23222. May her memory be for a blessing and may the family be comforted among the mourners of Zion and Jerusalem.