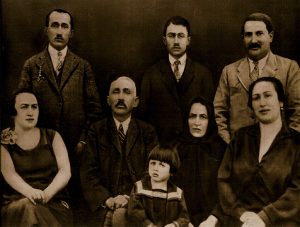 Clara and her family

Clara Daniels (Fried) was born on October 17, 1923 in Nyírkarász, Hungary to Morris and Jolan Fried. Clara had two brothers: an older brother named Laslo and a younger brother named Joseph. The Frieds lived on a large, family-owned farm that was integral to the local community.

In 1944 the family was sent to live in the Kisvárda ghetto. A few months later, they were deported to Auschwitz by railcar. Upon arrival, Clara was separated from her immediate family. She managed, however, to stay together with some of her cousins, Susan, Eva, and Katie. Clara was later sent to Dachau in the fall of 1944, and then to Allach, where she was liberated. After liberation, Clara went to the Feldafing displaced persons camp outside of Munich before immigrating to the United States in 1949.

Clara met her husband, Cary Daniels, in Brooklyn. Cary had immigrated to the States from Poland. He had also been in Auschwitz as well as five other concentration camps. The couple married. They had two sons before eventually settling in Richmond.

Our student June describes Holocaust survivor Clara Daniels as a well dressed, soft spoken woman who survived the unspeakable. Clara lived in Hungary during WWII, and was sent to Auschwitz after Hitler’s invasion in 1944. In Auschwitz, Clara experienced true horrors, like being forced to watch executions, do hard labor, and suffer starvation. But June tells us that along with luck, Clara’s positive spirit and connection to other women helped her to survive the concentration camp. June was saddened to learn of Clara’s death in 2018, and this episode is dedicated to Clara’s life and memory.

Your ticket for the: Clara Daniels