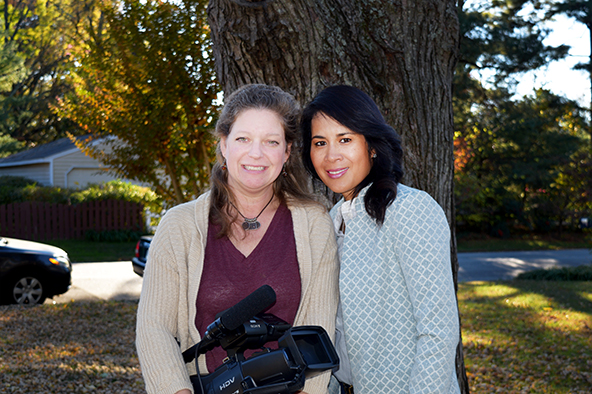 Videographer to the Virginia Holocaust Museum, Lindsay Stone, has the opportunity to film a documentary about the history of Cambodia and Khmer Rouge through local Survivor, Amanda Prak’s story. You may remember Stone’s documentary with Alexander Lebenstein, OBM, Kistrallnacht and Beyond, in which she travels with Lebenstein and his family back to Germany to visit where he grew up during the Holocaust. We are hoping you will consider making a contribution to Stone’s Kickstarter to help complete this project. Here is her message:

I would like to tell you the story of Amanda Prak.

I met her a few years ago while recording her story of survival during Khmer Rouge Regime in the 1970s. I work freelance with the Virginia Holocaust Museum. I was astounded at the fact that we are the same age, 45-ish, live in the same neighborhood, raise kids in the same schools, but our childhoods could not have been more different.

I lived in Georgia, while Amanda was scrounging food off the ground to feed herself and her three younger siblings in Cambodia. When she was older she was separated from her family and sent to work in the rice fields with hardly and sustenance. She was boarded with other girls her own age, but they were not allowed to speak, touch, or support each other without threat of death or punishment.

Amanda’s story is horrific, but fortunately for her, when the Vietnamese invaded in 1979, Amanda’s father was able to gather his family and leave for Thailand. Her family spent three months in the jungle making their way to the border. Once in Thailand, the family lived for two years in a Red Cross Refugee Camp. The family could be sent to Richmond, VA together in 1981.

Amanda attended Tuckahoe Middle School for her junior school. For work reasons they moved the family to California, and Amanda finished high school out west. The full family subsequently returned to Richmond. Amanda has two boys. One attends VCU and the other attends Tuckahoe Middle School.

In an effort to connect and support people in her homeland, Amanda started a charity called One Hundred Pounds of Hope. It has been a journey of recovery for her. She travels to Cambodia on an annual basis to feed people, and she has built a school in a very impoverished area. She believes that education can help break the sex trafficking trade that is currently taking so many young Cambodian girls.

I am hoping to travel to Cambodia with Amanda, her sister, and parents in January. My goal is to tell her story; to document their experiences and record the story of the how they survived the Khmer Rouge Regime, how they managed to exist, and then later escape.

I am an experienced videographer. In 2009, I made a similar trip to Germany with a Holocaust Survivor Alexander Lebenstein.

I have created a Kickstarter fund for the trip. This Kickstarter ”Facing a Cambodian Past” ends on Dec. 13th. I will only receive the funds if 100% of the money has been pledged to the project.

If you’re interested in making a contribution, you can make it here.

Your ticket for the: Lindsay Stone + Amanda Prak: “Facing a Cambodian Past”