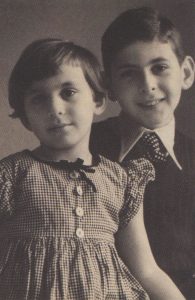 Lia and her brother Max

Born in 1934 in The Hague, Rosalia or “Lia” grew up in Scheveningen, which was a beach resort town. Lia had one older brother named Max. In May of 1940 when the German army invaded Holland, Lia and other Jews were forced to wear a yellow Star of David, the purpose of which was to dehumanize and identify people that were Jewish. Lia did not want to wear the Star, especially the day that her mother made her a new dress. Wanting to show her Grandmother her dress, Lia left the house without wearing her badge and someone recognized her. Because she had defied orders Lia was punished by the Nazis and made to clean bicycles for three days.

A year later Lia’s grandparents, uncle, aunt and five cousins had been deported. In order to avoid the same fate Lia’s mother scheduled a surgery to have her healthy appendix removed, it was at the hospital she hoped to meet a member of the Resistance and find out how she could get her family into hiding. While she was in the hospital, Lia, her father and Max were taken to a deportation center. Allowing him a week to get his wife out of the hospital, Lia’s father and his family were able to escape during this time. In was then the family went into hiding. Lia and her family were all in different hiding places and moved often to different hiding spots as it was unsafe to stay in one place for too long. During her time in hiding Lia hid in such places as a closet, attic, a houseboat, different farmhouse, behind a secret wall and a rowboat. When Lia was hiding in the rowboat she would stay at the home of a family during the day and sleep in the rowboat at night, under the cover of the river grasses. The Nazi’s eventually discovered that Lia was staying at the home and came to capture her, when they could not find her they set the house on fire, thinking she would run out. Lia managed to escaped and stayed in the rowboat for the next several weeks, eating only duck eggs.

Eventually Lia was able to be on the move again and found refuge with another family that had a printing press in their basement. It was from this press that they would print news broadcasts that Lia would help to distribute. Lia always moved to her next hiding place at night and moving was always very dangerous. During one move with another member of the underground Resistance, they were spotted by the Nazis who began to shoot at them. Running into a ditch, Lia was saved by this man who put his arms around Lia to shield her from the bullets; he had been shot and was dead. Lia then fled to a farmhouse where the family hid her in a haystack. The group of Nazis chasing Lia found her once again, using pitchforks to stab the stacks of hay where Lia was hidden, they did not get her.

During her time on the run and in hiding, Lia had hid in about 20 different places. In 1944 Lia was eventually found out when the Nazis raided a house that she was being hidden in. Lia was taken to jail, then to several concentration camps, eventually being deported to Auschwitz.

Lia survived and after the war went to art school and worked several jobs. Lia moved to Norfolk, Virginia in 1956 and married Abraham Kaplan, they had two children.

In this episode, listen to the story of Holocaust Survivor Rosalia (Rosalina) Katz Kaplan. Rosalia made her way through the Resistance network in Holland to an estimated 20 different safe houses while hiding from the Nazis as a young girl from 1941-1944.  After being captured in 1944, Rosalia survived three concentration camps, including Auschwitz, where she was used for medical experiments. Despite her incredible experiences, Rosalia shared a message of love and tolerance with students around the state of Virginia until she died in 2017. This story, retold by history teacher Samantha Futrell, is an abridged version her 2006 interview recorded by the Virginia Holocaust Museum.

Your ticket for the: Rosalia “Lia” Katz Kaplan