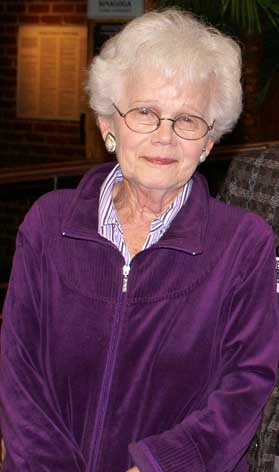 We at the Virginia Holocaust Museum are saddened to hear that local Survivor, Simone Schwarz has passed away earlier today.

Born in Poland in 1927, Simone Schwarz (Golub) was one of five children living in the small town of Kreva. In 1939, Simone and her family were living under Soviet occupation after Nazi Germany and the Soviet Union invaded Poland. For two years Simon’s family took in other Jewish families from Nazi occupied Western Poland until 1941, when the Nazis broke their pact with the Soviet Union and invaded Eastern Poland.

After leaving the Ghetto, Simone was moved to several camps from 1941-1945, including: Plaszow, Riga, Stutthoff, Kaufering and Bergen-Belsen. In 1945, Simone was liberated from Bergen-Belsen by a British Armored Division along with 60,000 other prisoners. She and her sister, Michla, are the only members of her family to survive the Holocaust. While in a Displaced Persons Camp after liberation, Simone met Kalman Schwarz. Kalman took a special interest in Simone and looked after her. Kalman wanted Simone to go with him to Germany, but her sister wanted to return to Poland. After careful thinking, Simone decided to go with Kalman back to his hometown in Germany where they were married shortly after. In 1951, Simone and her husband brought their two sons to the United States, where she had a daughter.

Services is Friday, the 3rd, at 1pm at Bliley's on Augusta Avenue. May her memory be a blessing.