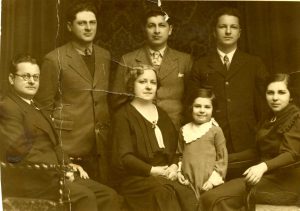 Steven (Standing 3rd from the left) and the Kende Family, May 1936

Steven Kende was born in Humenne, Slovakia on August 7, 1919. When the Nazi occupation began on March 15, 1939, Steven was living in Prague with his brother, Vojtech, and attending his first year of medical school at Karlovy University. He was not allowed to take his exams. He began working odd jobs to help his family.

In October 1941, he was deported to Lipa Concentration Camp. It was referred to as a “reeducation camp” and Steven worked as a laborer tending dairy cows. In the fall of 1943, he was sent on a cattle car to Terezin where he tended the oxen. When Terezin was liquidated in 1944, Steven was transported to Auschwitz. While there, a request was put out for metalworkers and he was sent to Meuselwitz, a sub-camp of Buchenwald. The factory where he’d been working was bombed, and Steven was sent by train toward Klingenthal.

Eventually, the prisoners were marched towards the east as the Soviets approached. Steven escaped from the march and attempted to find refuge in Kraslice. The major ordered a police officer to escort him back to the marchers, but he convinced the police officer to let him go free. He offered what help he could to others on his journey to Karlovy Vary and they provided him with food, clothing, and shelter.

After the war, Steven found his sisters in Mexico City where he met his wife.

The best summation of this episode comes from our student, Roman, who tells Steven’s story in this episode:

Your ticket for the: Steven Kende