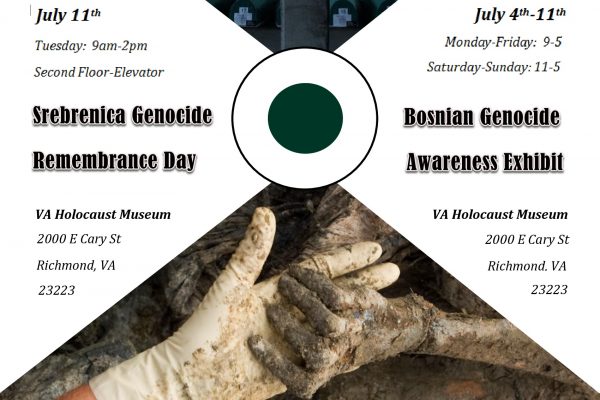 The Virginia Holocaust Museum, Institute For Research Of Genocide Canada (IGC), and the Congress of North American Bosniaks (CNAB) invite you to Srebrenica Remembrance Week for the 22nd anniversary of the Genocide in Srebrenica. This event is free and open to the public.

The Bosnian Genocide Awareness Exhibit, an exhibition of photographs by journalist Salih Brkic of genocide in Bosnia and Herzegovina, will be on view in the Choral Synagogue Auditorium. from July 4–11.

Srebrenica Genocide Remembrance Day will take place in the TEI classroom on July 11 from 9A–2P.
– Keynote speaker Eldin Elezovic, president CNAB
– “Genocide in the Safe Zone of the UN, July 1995” – Lecture by Academician Smail Cekic (9:30-10:30). After the lecture there will be discussions amongst lecturers and guests.
– Project of films by Salih Brkic (10:30-11:30). After screenings, there will also be discussion with Mr. Brkic and guests.
– Ambassador of Bosnia and Herzegovina to the United States, Haris Hrle
– Democratic Candidate for Virginia’s 7th Congressional District, Eileen Bedell
* The Bosnian American Association
Panel discussion on the topic: “The Diaspora’s role in the institutionalization of the culture of remembering genocide in Bosnia and Herzegovina as an important factor for a better European future in Bosnia and Herzegovina.”

You can learn more about the event on the Institute for Research of Genocide Canada’s website here.

Your ticket for the: Srebrenica Remembrance Week