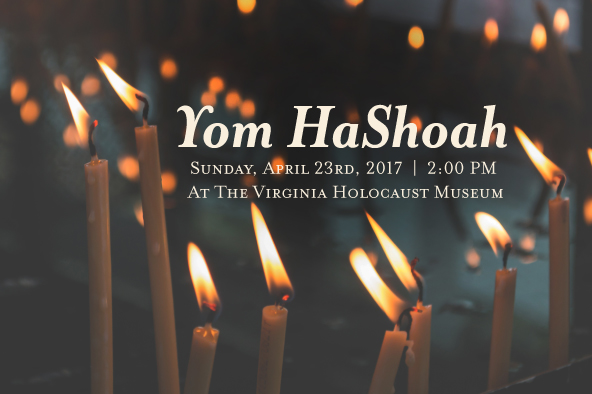 The Virginia Holocaust Museum cordially invites you to our 2017 Yom HaShoah commemoration. Every year, we pause to remember and honor the Six Million Jews who perished in the Holocaust. This year, the Museum’s Day of Remembrance will be held on Sunday, April 23, 2017 at 2:00pm. The featured speaker will be University of Maryland professor and author, Dr. Jeffrey Herf. Winners of the 2017 Student Art Contest will also be announced and awarded.

Jeffrey Herf is a Distinguished University Professor in the Department of History at the University of Maryland, College Park. His publications on modern German history include Undeclared Wars with Israel: East Germany and the West German Far Left, 1967-1989 (Cambridge University Press, 2016); Reactionary Modernism: Technology, Culture and Politics in Weimar and the Third Reich (1984); Divided Memory: The Nazi Past in the Two Germanys (1997), winner of the American Historical Association’s George Lewis Beer Prize; The Jewish Enemy: Nazi Propaganda during World War II and the Holocaust (2006), winner of the National Jewish Book Award; Nazi Propaganda for the Arab World (2009), winner of the bi-annual Sybil Halpern Milton Prize of the German Studies Association in 2011 for work on Nazi Germany and the Holocaust. He has also published essays and reviews on history and politics in Partisan Review, The New Republic, The Times of Israel, The American Interest, and the National Interest.