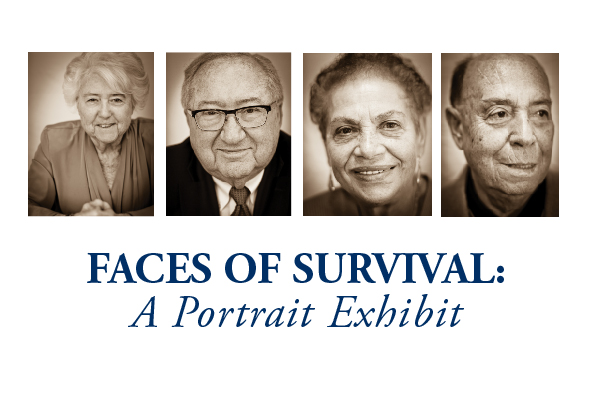 Some were hidden children, concealing their Jewish identity. Some were infants and toddlers whose families were forced to flee their homes. They came from all corners of Eastern and Western Europe. All had the normalcy of their childhoods replaced by fear, and often the horror of witnessing death and losing loved ones to senseless brutality. All of them made new homes in the United States.

Some came to our shores immediately following the war, with or without surviving parents. They learned a new language and made new starts. Some came later in the century, after further persecution behind the Iron Curtain. Many of these survivors followed or came with their adult children.

All are tremendously grateful to and for the United States of America. Meet some of Hampton Roads’ remaining Holocaust survivors. Read their stories. Remember them. Share them. Help continue their legacy.

About the photographer:
Dean Whitbeck is a photographer, designer, and educator whose work is rooted in making social impact visible.

Over the last 15 years, he has been involved in photographing and documenting a range of intimate stories about the dignity and courage found in marginalized communities. A sought-after communicator and storyteller, Dean’s 2017 TED talk, Holding Multiple Truths, focused on ‘seeing’ the truths and stories found in our most vulnerable communities as a form of social change. He has been invited to speak on leadership and social impact at The Martin Agency, Franklin Street, Virginia Commonwealth University School of Art Education, Longwood University’s School of Journalism, Virginia Union University School of Business, and nationally at multiple art and educational conferences.

This exhibit was produced and made possible by:

Register for Tour: Faces of Survival

Your ticket for the: Faces of Survival