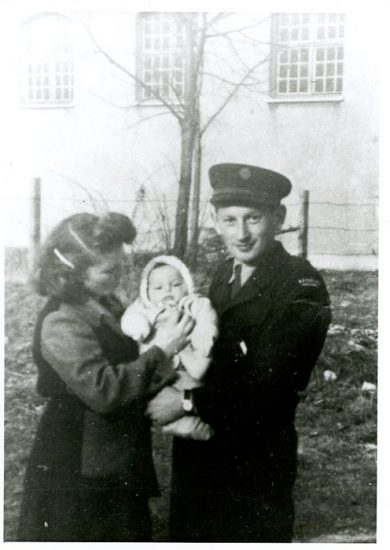 Boleslaw (Bud) Brodecki was born in Warsaw, Poland on March 1, 1921 to Meiloch and Sura Brodecki. He had one sister, Rosalia, who was six years his senior. With the rise of anti-Semitism in Europe, Bud and Rosalia fled to Eastern Poland to stay with his sister’s fiancée in November of 1939. The three were later moved to a ghetto before being deported to Auschwitz-Birkenau in 1943. Bud’s sister, brother-in-law, and nephew perished in this camp. Over the next two years, Bud was moved between Swientochlowitz, Gusen, Reca/Dresden, Mauthausen, Leitmeritz, and Theresienstadt. He was liberated from Theresienstadt on May 8, 1945.

Bud returned to Warsaw to find his family, but discovered they had perished in the Holocaust. He ended up in a displaced persons (DP) camp in Austria where he began work as a police officer. Through this position, he met his wife Zosia (Sonia) Piekarska. The couple was married shortly after, and had their first child, Joseph, in 1946. The family immigrated to the United States in 1949, raising their four children in the States.

To use the Brodeckis in your research, here is a link to the Brodecki Family Finding Aid.

Your ticket for the: Using Primary Sources 1