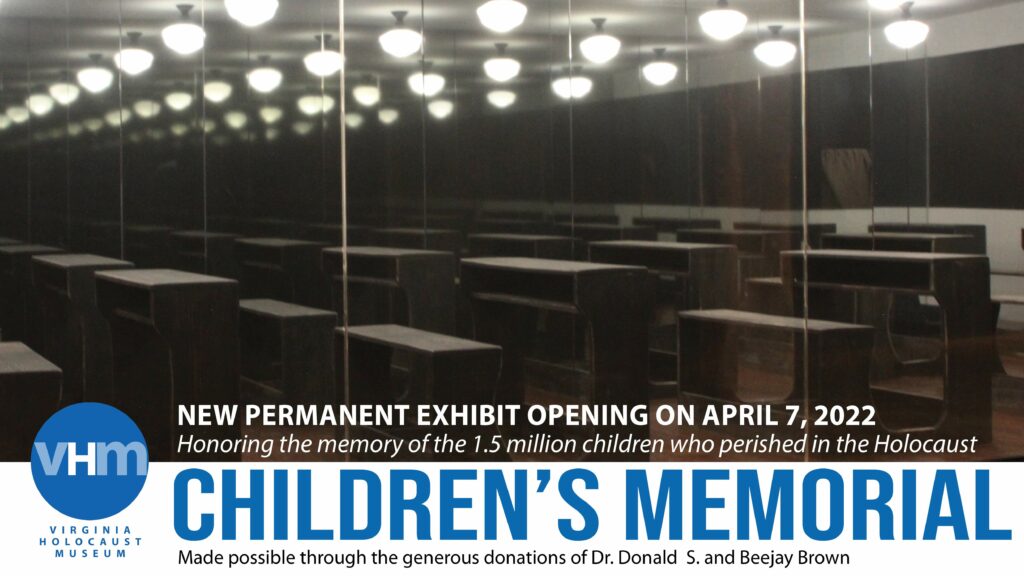 The unique Children’s Memorial, an exhibit honoring the memory of the 1.5 million Jewish children who perished in the Holocaust, opened in 2022. This significant addition to the Virginia Holocaust Museum’s permanent collection, is the first Children’s Memorial of its kind in the United States.

Using mirrors and somber lighting for dramatic effect, the Children’s Memorial creates a stunning visual of an infinite panorama of empty classroom desks representing the unfathomable number of children and their unborn descendants who were victims of the Nazi’s Final Solution to exterminate Jews from Europe.

How did this impactful exhibit come into existence?

In 2015, the Exhibits Team at the Virginia Holocaust Museum drafted a master plan for renovating and/or creating core exhibits. The overall guidance called for the consistent use of three primary elements: an abridged historical narrative; use of artifacts, documents, and photographs from the VHM collection; and the experiences of Holocaust survivors who settled in Virginia.

The original concept for the Children’s Memorial consisted of a display of names combined with a looping silhouetted video. However, after receiving generous donations from Dr. Donald S. and Beejay Brown in 2019, the Museum contracted with Richmond-based design firm Riggs Ward to create a new Children’s Memorial. The key component for the VHM was to own a permanent exhibit that works simultaneously as a memorial and provides space for reflecting on the enormity of the genocide.

Riggs Ward presented the Museum with five options for renovating the space and the Museum chose the mirrored infinity classroom featuring vintage wooden desks that replicate the style of furniture typically found in a German school during the World War II era. Visitors will be deeply moved by the panorama of unoccupied school desks that appear to stretch into an infinite future – a visual metaphor for a tragedy beyond human comprehension.

The Children’s Memorial ensures that we never forget the horrors of history’s darkest hour.

Schedule your visit to the Museum now!

Your ticket for the: Children’s Memorial